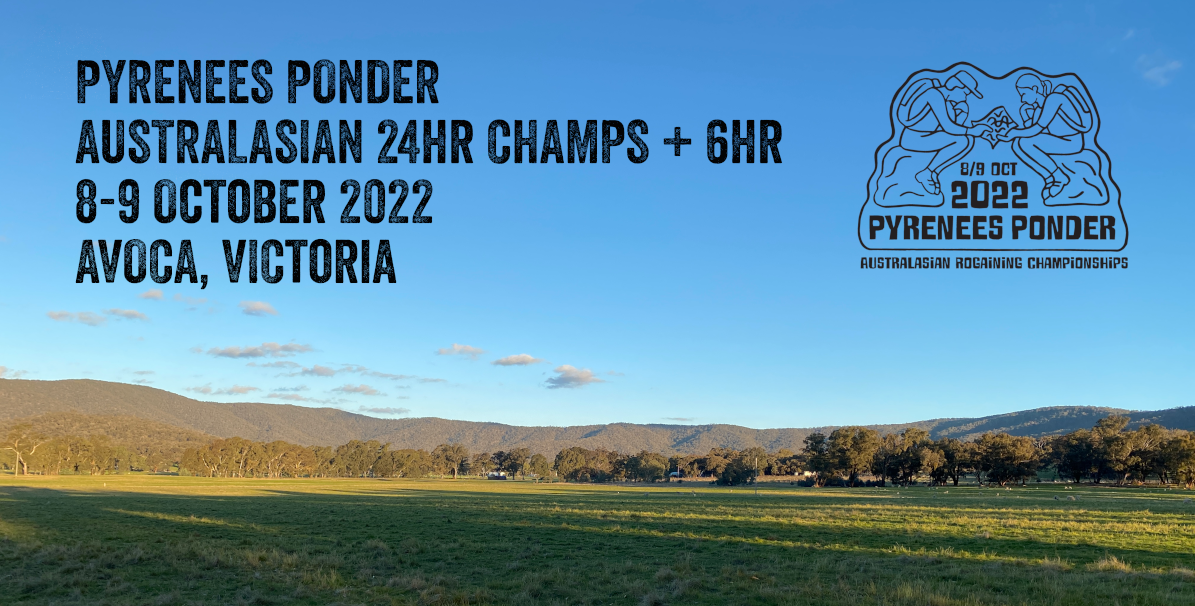 There are 3 competitive events at this Rogaine:

There are no permanent accommodation options at the Hash House. Free bush camping is available on the Hash House site, with the nearest town amenities in Avoca, St Arnaud or Ballarat.

There are no permanent accommodation options at the Hash House. Free bush camping is available on the Hash House site, with the nearest town amenities in Avoca, St Arnaud or Ballarat.

The Rogaine map is at 1:30,000 scale with 10-meter contours. It is aligned to magnetic north, with magnetic north-south lines at 1km intervals.

Map size is A1 and will be printed on:

Each team member is required to carry:

Each team is required to carry:

The team first aid kit must include

The Hash House site is on private land in Warrenmang, Victoria.

This is approximately 25km west of Avoca, Victoria. It is a comfortable 2.5 hour drive from Melbourne on freeway. The most direct route is via the M8 Western Freeway to Ballarat, then B220 Sunraysia Hwy to Avoca, with the last 3km on a good gravel track.

Detailed travel instructions and the location of the Hash House will be included in the Final Instructions posted to the website one week before the event.

VRA Bus – must be booked in advance online at entry time. Departure from Southern Cross Railway Station (a main Melbourne railway station in the CBD) on Friday afternoon (times listed above), with an additional pickup point at Tullamarine Melbourne Airport. The bus has an estimated time of arrival at the Hash House at about 5.30 pm. If flying into Tullamarine, please arrive early to allow for flight delays etc, which is unfortunately a common Friday afternoon occurrence into/from Melbourne.

To participate in an Australian Intervarsity Rogaining Championships, students must be enrolled at a tertiary education institution recognised by UniSport Australia.

Teams consist of 2-5 students from the same university. Both part-time and full-time students are eligible. There is no age restriction, ie. under-graduate, mature age and post-graduate students qualify.

The Intervarsity rogaining competition began in 1969 and from 1981 was coordinated by the Australian Rogaining Association.

The Foundation has in the past paid the travel costs for one university team from each state so that there can be a well-represented national competition.

State Rogaining Associations are responsible for determining their own selection criteria for the NAMSF subsidies (ie. a single qualifying event, or a cumulative point score from multiple events, whether 24 hour or shorter qualifying events). However, for the purposes of the subsidy, preference must be given to under-graduate full time students.

Entrants should contact their state rogaining association as soon as possible for details about their selection process for the state representative team.

NAMSF is the Nigel Aylott Memorial Sports Foundation, set up in memory of Nigel to encourage engagement in the outdoor sports of rogaining and adventure racing.

NAMSF activities may include the following:

Who was Nigel Aylott
Nigel Aylott showed some talent as a long-distance runner at school but at university got into the full range of outdoor activities available through the Monash BushWalking Club, which included skiing, kayaking, and rogaining. As his endurance and navigation skill developed, so did his success at rogaining, eventually winning the World Rogaining Championships in 1998 and the Australian Rogaining Championships in 2000 and 2001.

As adventure racing developed, Nigel saw it as the natural progression from long-distance running and rogaining. He loved experiencing the different locations in which the adventure races were set. Nigel competed in several Southern Traverse and EcoChallenge events before teaming up with Tom Landon-Smith, Alina McMaster, and Matt Dalziel to form the successful team AROC. Nigel was tragically killed in the 2004 Primal Quest race after being hit by a large boulder dislodged at the top of a gully.

Nigel was highly regarded in the community and friends encouraged Nigel’s family to set up this foundation to leave a legacy by supporting the sports Nigel loved and gave so much to.

Our final event instructions will be made available on the Rogaining Victoria website and emailed on Friday 30th September (one week before the event).

The Final Instructions contain an event waiver and confirm all event details, the location of the Hash house and directions, mandatory gear requirements, start times, and any last-minute changes.